HISTORY OF THE FEDERATION OF TAMU MOTHERS’ CLUBS 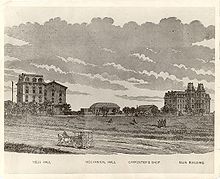 Texas A&M is the state’s first public institution of higher education. With a current student body of over 64,000 and a physical campus of over 5,200 acres, Texas A&M is also among the nation’s largest universities. Its origins, however, were much humbler. Texas A&M owes its origin to the Morrill Act, approved by the United States Congress on July 2, 1862. This act provided for donation of public land to the states for the purpose of funding higher education, whose “leading object shall be, without excluding other scientific and classical studies, and including military tactics, to teach such branches of learning as are related to agriculture and mechanic arts.”

The State of Texas agreed to create a college under the terms of the Morrill Act in November 1866, but actual formation didn’t come until the establishment of the Agricultural and Mechanical College of Texas by the Texas state legislature on April 17, 1871. A commission created to locate the institution accepted the offer of 2,416 acres of land from the citizens of Brazos County in 1871, and instruction began in 1876. Admission was limited to white males, and, as required by the Morrill Act, all students were required to participate in military training. 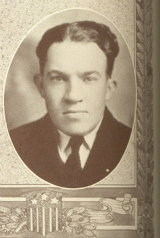 In September 1921, Dallas native Harold Peoples was a Freshman at the Agricultural and Mechanical College of Texas, an all-male military institution with an enrollment of 1800 students.  Strict regulations restricted Harold and his fellow cadets to the campus and the average student rarely communicated with anyone other than his professors and classmates.  The young men were forbidden to have cars at school and depended primarily on trains for transportation between College Station and their hometowns.

Harold’s mother, Mrs. H. L. (Ada Brooks Allen) Peoples, was concerned with “the poor quality of life on the A&M campus”.  She worried that there was “no entertainment, no culture, and a complete lack of women’s influence”.  While attending the state PTA convention in San Antonio that year, Mrs. Peoples discussed her concerns with then Texas Governor Pat Neff.  She recognized the need for “parental guidance and continued ties to home” to ensure a happy and successful college career for the cadets.

Mrs. Peoples decided to visit her son on her way home to Dallas, but when she arrived in College Station she found Harold was away on a field trip.  She talked instead with a Senior cadet who was impressed with her interest and suggested that parents should become familiar with A&M during their son’s freshman year instead of waiting for his graduation to visit as was the custom.  After inspecting dorm rooms and visiting with other cadets, Mrs. Peoples left the campus with a strong determination to do something to improve the situation at the A&M College of Texas.

In February 1922, Mrs. Ada Brooks Allen Peoples met with ten other interested mothers and the Dallas A&M Mothers’ Club was organized with Mrs. Peoples serving as the club’s first President.  The club’s objective was stated “to contribute in every way to the comfort and welfare of the boys and to cooperate with the faculty of the college in maintaining a high standard of moral conduct and intellectual attainment”.  The mission of the all Aggie Moms’ Clubs remains the same today.

The eleven original Aggie Moms traveled over dusty roads to College Station in a caravan of Model T’s.  They presented themselves and their ideas to the college administration and were practically laughed off the campus.  Being wise women and knowing “the way to a man’s heart is through his stomach”, the Moms organized a second trip which included the fixings for what was called a “spread”…fried chicken, sandwiches, pies and cookies. The President of the A&M College and his wife, along with over one hundred Dallas cadets attended that first “spread”.  It was such a successful event that it became an annual affair and grew to include the entire student body. 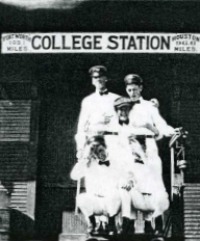 In October 1922, it was a man who organized the second A&M Mothers’ Club.  Dr. H.B. Stout, a Methodist minister, was the President of Texas Women’s College in Fort Worth and his son , Stephen, was a student at the A&M College of Texas.  Dr. Stout placed this ad in the Fort Worth Star Telegram: “All mothers of boys who are attending A&M College will meet at a luncheon Wednesday noon.  The Fort Worth A&M Mothers’ Club will be formed”.

Our organization has grown significantly over its history, but our mission remains the same.  The Federation and each individual Aggie Moms’ Club, from the largest with over 300 members to the smallest with only 5 members, share a common goal: To band together to do whatever is necessary to benefit the students at Texas A&M University.  Each of the mothers also benefits in the process by sharing a camaraderie that cannot be found elsewhere.  An Aggie Moms’ Club meeting is a nurturing place to share the successes and setbacks of a child’s college career with others who have had the same experiences. 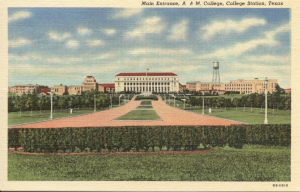 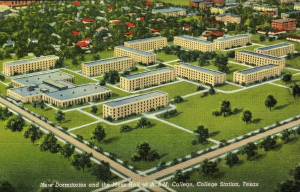 All Images on this page are used Courtesy of Cushing Memorial Library and Archives, TAMU.